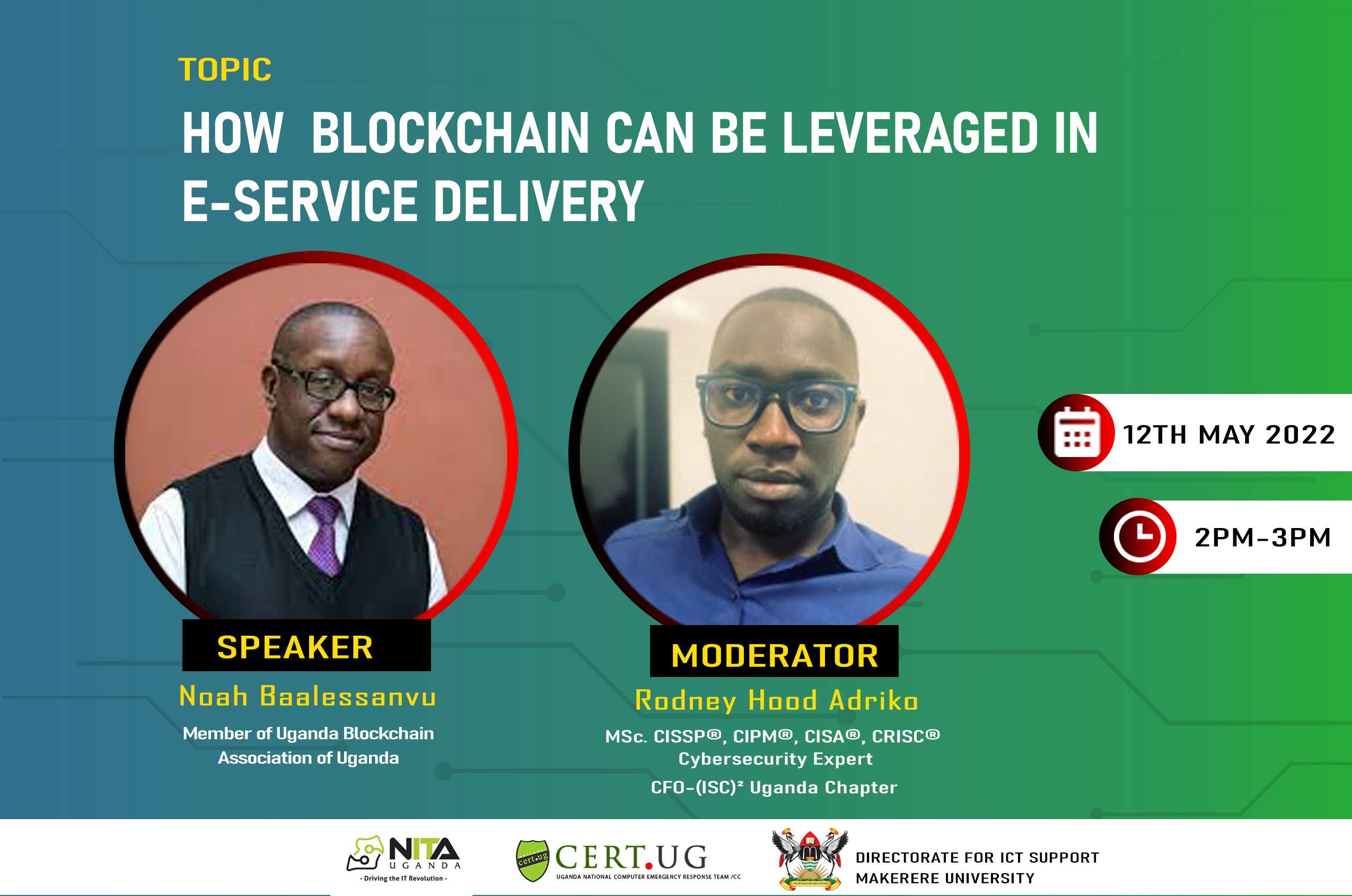 As a continuation of the online webinars organized by NITA-U, Yesterday the 12th May 2022, the topic tackled the key features and applications of blockchain.

"For the longest of times, Africans have been known as expert users, to the best. All these technologies are happening in other places and simply imported into Africa" said Noah Baalessavu who was the presenter of the day.

“I believe we are in a place where the tides are changing, Africa's innovations are beginning to shine globally” he added, attributing the changes to the new technologies emerging right now among which is Blockchain.

"Blockchain technologies could boost the global economy US $1.76 trillion by 2030 through raising levels of tracking, tracing and trust"--PWC

The webinar tackled the curiosity around Blockchain and the things that are possible with it.

Oracle defines Blockchain as a ledger of decentralized data that is securely shared.

Blockchain works on the principle of distributed architecture, instead of having a centralized place, every user has a copy/ledger/transaction record and if anything is changing on that database, everyone who has a copy gets an updated data entry–So blockchain is distributed Ledger.

Due to its operation principle, blockchain allows the following features

1. Validation by consensus
Before appending a transaction onto the chain, it has to undergo validation and everyone on the network tests the new information to make sure it is accurate and  sound before it is added to the network. This adds a layer of security.

2. Immutability
Once a block of data is added onto the chain, it can not be deleted.

3. Unforgeable
Very difficult to bring down the network. Because if one node goes off, all other nodes continue communicating, thus a very resilient network

4. Traceability
Because data is added in a sequential way, a blockchain can bring multiple parties in a particular value chain to be able to have one source of truth.

Due to the above features, blockchain has the following advantages

1. Enhanced Security
Information is stored across a network of computers rather than a single server, making it difficult for hackers to view data.

2. Greater Transparency
Without blockchain, each organization has to keep a separate database. Because blockchain uses a distributed ledger, transitions and data are recorded identically in multiple locations. All network participants with permissioned access see the same information at the same time, providing full transparency.

3. Instant Traceability
Blockchain creates an audit trail that documents the provenance of an asset at every step on its journey. In environments where consumers are concerned about environmental or human rights issues surrounding a product–or an industry troubled by counterfeiting and fraud–this helps provide the proof. With blockchain, it is possible to share data about provenance directly with customers.

4. Increased Efficiency and Speed
Traditional paper-heavy processes are time-consuming, prone to human error, and often require third-party mediation. By streamlining these processes with blockchain, transactions can be completed faster and more efficiently.
Documentation can be stored on the blockchain along with transaction details, eliminating the need to exchange paper.

5. Automation
Transactions can be automated with “Smart contracts”. Once specified conditions are met, the next step in the transaction or process is automatically triggered. The smart contracts reduce human intervention as well as resilience on third parties to verify that terms of contract have been met.

We are now in the world of web3 which is characterized by the token economy. It comprises reading, writing and execution  operations.

Key Use Cases of Blockchain

1. Proof of Ownership and Transfers

Governments can use blockchain to permanently store asset transactions such as land, property, and vehicles on a public ledger.

Traditional legal-contract execution is costly to both governments and their citizens. Smart, self-executing contracts enabled by blockchain can remove the need for intermediaries and potentially improve contract creation and execution. These contracts are publicly accessible and secure within the network.

Governments are consistently looking for centralized cloud-based solutions to validate the documents of all their citizens, and blockchain could be that solution.
The technology can store hash values of citizen documents on the blockchain, allowing governments to provide an attested and permanently time-stamped electronic version of these documents anytime.

Since blockchain can permanently time-stamp transactions at any time, companies or individuals can file patents without enduring the cumbersome submission process. While the actual patent verification might take time, the time-stamp associated with the filing can help solve multiple patent-related disputed and potentially prevent costly lawsuits

In his closing remarks, Noah Baalessanvu challenged the attendants to actively participate in the adoption of blockchain citing the many opportunities available in the industry. "You can participate in it, or watch the people participating in it." He said.

Links to the previous webinars

Recap: How Blockchain Can be Leveraged in E-service Delivery

Recap: What you Need to Know about Privacy Engineering